For many years I’ve heard and read variations on the same theme: Volunteers are just well meaning amateurs. If you want something done properly then it needs to be handed over to a professional.

It’s a position used as a justification for not giving volunteers meaningful things to do. They’re amateurs, they’d just mess it up.

It’s an argument used to combat fears of job displacement. How many times have we read in recent years that library services will suffer if volunteers are left do the work of professional librarians?

It’s a way of thinking that perpetuates a division in Volunteer Involving Organisations, between the paid staff - who are seen as essential - and the volunteers - who are seen as a nice to have optional extra, a bit like metallic paint on a new car. 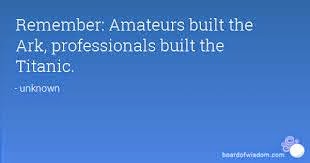 We need to stop this thinking now more than ever. Any time we encounter such views we need to start actively challenging them.

The first relates to definitions.

Whilst it is true that the word amateur can be used to denote competence, its primary definition is one that refers to an activity undertaken without pay. Professional on the other hand suggests either that someone belongs to a specific profession (a doctor, lawyer or teacher for example) or is being paid for the work they do.

So, whilst some may suggest volunteers are incompetent by calling them amateurs, the labelling of paid staff as professionals carries with it no assumption of competence.

Second, labelling volunteers as well meaning amateurs, and therefore implying they are incompetent, is just lazy thinking that dodges the need to consider properly how we effectively engage people in our organisations.

Let’s go back to the library example I mentioned above. At no point does anyone who has criticised the idea of volunteer run libraries ever appeared to stop and considered that perhaps there might be very well training, highly competent professional librarians who might want to volunteer to help run these libraries. Perhaps they are retired and want to get involved in their field again? Perhaps they are non-practicing librarians but want time away from their non-library day jobs? Perhaps they are unemployed and/ or returning to work and want to get up-to-speed again?

Nope, straight away the assumption is that we’ll just take anyone we can find and throw them in at the deep end to run a library. If we did that then of course professional librarians would be a better option, but would any competent Volunteer Manager ever do such a thing? No! We spend time finding the right people, selecting them carefully for the right roles, training them up and supporting them to do the best work possible.

Finally, the issues we face in society are simply too big for any one pay category to deal with. No Voluntary and Community Sector organisation is ever going to have all the money to pay people to do all the work that needs doing. That’s truer now then ever. A team effort is needed, one where paid and unpaid ‘staff’ are engaged and deployed most effectively to work together to achieve an organisation’s mission.

We can no longer afford to waste energy discrediting volunteers as well meaning but incompetent amateurs whilst automatically assuming paid staff are always competent and the solution to everything. Instead we need to embrace the passion & potential of volunteers and employees, amateurs and professionals, and harness that for the good causes we serve.

Anything less is at best wasteful, and at worst negligent, behaviour in the stewardship of our resources when so many are in need of our support.

Rob Jackson Consulting Ltd delivers expert support that is passionate about the potential of people.

If we had to sum it up in one short phrase, we are all about engaging and inspiring people to bring about change.

This blog is a forum for Rob's thoughts on a range of issues from his perspective as a leader in the volunteering movement.

Three questions to ask about your learning plans for 2016

In this guest post for the start of 2016 our friend and colleague Sue Jones shares her thoughts about learning and development for Voluntee...

Links to some of our favourite sites